The good news is that, as expected, I was discharged from the cardiac ward on Christmas Eve afternoon, just in time to watch Carols by Candlelight and wrap presents (Christmas tradition). And I was mightily relieved.

The following day dawned bright and sunny, and fairly quiet (at least in our household), so Julie and I had a leisurely Christmas breakfast, exchanged gifts and enjoyed a wonderfully relaxed Christmas morning.

We spent the afternoon with the rest of the family, ate too much, played complex board games with kids young and old, dozed on chairs and generally had a great day. We arrived home pooped, spent some time on our latest jigsaw (the Mona Lisa, a Christmas gift -– diabolical – too many black bits) and hit the hay. It was a great Christmas Day.

Off to the Austin on Boxing Day

Which was good, because on Boxing Day I got up and went to the toilet and lo and behold, blood. Lots of it.  Groan. After a very short discussion, Julie called an ambulance. Within 30 minutes I was on the way back to the dear old Austin ED.

When I left the Austin on Christmas Eve, I was put on two new meds to thin my blood (Aspirin and a new drug called Ticagrelor [Tie-Kag-gr-law]), in preparation for the stent procedure. They also changed my anti-AF (Atrial Fibrillation) meds from Flecainide to Amiodarone, which is also more amenable to stent procedures.

The blood thinners were a good move from a cardiac viewpoint, not so good for someone with a history of diverticulitis (where small sacs in the bowel become infected and burst, sometimes causing bleeding), like me about a year ago.

About two months ago I had a small diverticulitis episode, without bleeding, and forgot about it. But my body clearly remembered. What seems to have happened is the blood thinners did their job well, also dissolving a clot that was holding back a bleed, and away it went.

They stopped the Ticagrelor immediately. Over the next two days, I had two more bleeds, the effect of which were tracked by ever falling haemoglobin levels. To compensate, I had a couple of units of blood during dialysis.

The Christmas entrance to dialysis 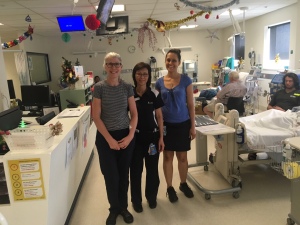 On the third day, it seemed to have stopped. Things were less bloody. Then diarrhoea all night. It’s like my bum was cleaning house, like a lawnmower engine that hasn’t been used for a while sputters and spurts when you first try to start it.  Once it starts, all is well. So was I.

Then some interesting news. The cardiac doctors wanted me to re-start Ticagrelor within a week of discharge, so my blood is thin and ready for the procedure. What’s more, I should stay on it for 12 months after the stent procedure.

The blood drained from my face (I don’t know where it went but it stayed inside me). Julie and I are very nervous about this.

I made a rush appointment with my cardiac specialist to talk it through. I went to see him yesterday.

Unfortunately, the night before the appointment, my heart went into AF. The switch from Flecainide had left me a little short of protection and AF arrived like a runaway blender. Combining AF with a 90% blocked coronary artery can be challenging. I felt so weak I could hardly walk to the lounge from the kitchen without my heart beating hugely and me feeling highly collapsible. I wasn’t sure whether it was the AF going faster or the blockage causing a mini heart attack. I’m still not, but I’m still here, so it was probably the AF.

Fortunately, I had this ideal cardiac appointment booked, and AF was the first topic we discussed. He doubled the Amiodarone dose so my stores will be at full protection all the time between meds. (I took two tablets last night and it’s not over, but I’m a lot better today.)

Then he gave me a stay of execution on the blood thinner for 12 days. A scare delayed 12 days is 12 days enjoyed. Maybe any bleeding that was holding off will heal properly between now and the procedure day (19 January – two weeks today) so the bleeding won’t restart.

Anyway, that’s the state of play. I’m mostly looking forward to the procedure, so I can get fit again, put on some muscle, go walking and generally reclaim my freedom. But I’m mostly dreading the blood thinners. What if I bleed again? Will they still do the procedure? If so, will I need the thinners for 12 months?

I’ll have all the answers soon enough. So tune in two weeks from now for the next exciting instalment.

Hi everyone. Just a quick post to let you know I’m still alive and kicking. My silence is due to spending what seems to be my annual few weeks’ stay in hospital due to unknown causes.

I’m home now, but with so little energy, my Nephrologist ordered four units of blood. I had the final 2 units last night on dialysis. So this morning I’m waiting for a burst of energy that will enable me to walk further than twice around the bed.

But things seem to be on the up, except the hip, which is taking its time. Hopefully, I’ll be back to the blog with inspiration and enthusiasm in the next couple of weeks.

As regular readers will know, over the last few months, I became quite unwell well, with fevers, lethargy, persistently low haemoglobin level (HB) and generally feeling crappy.  Also, gradually (so gradually I didn’t realise it was happening), my muscles and joints began to stiffen and lock up.  I was walking around like a wizened old man: bent over, no flexibility, only just able to touch my toes.

I eventually spent a couple of weeks in two different hospitals.  But it seemed that no-one could find the problem, until one young and enthusiastic doctor
thought he recognised it, because it was his specialty.  He sent me for a full body MRI and which confirmed his hunch.  I had something I could barely pronounce: Polymyalgia Rheumatica (PMR). END_OF_DOCUMENT_TOKEN_TO_BE_REPLACED

One of the less attractive side effects of long term BigD is the gradual expansion of aches and pains in muscles and joints: hands, feet, shoulders and knees (especially knees!).

I first noticed it about two years after I returned to BigD in 2008.  Slowly, my joints began to lose their flexibility.  I started to get what I thought was arthritis in my hands and knees.  I couldn’t get my right hand to make a fist, just a claw (maybe that’s what that guy, “the Craw” had in Get Smart?). END_OF_DOCUMENT_TOKEN_TO_BE_REPLACED

(Sorry about the delay in writing.  I have been working on a post about the appropriate treatment for fistula haemorrhage, signs and symptoms, actions to take so that people can compare what should be done to what was done.  It is taking longer than expected, but it’s coming soon.)

For a range of reasons, I stopped going to the gym about six months or so ago.  I had aches and pains and a little arthritis, and it seemed to me that the gym wasn’t helping.  Also, my knees became wonky to the point where I couldn’t run for 30 minutes without ending up needing a Zimmer frame for the rest of the day (almost).  I had lost my Moxy – my style, my coolness, my confidence.  So I got the sulks and decided that would I drop my gym sessions and runs, and replace them with extra walks and more rides on my exercise bike at the BigD.  What difference could it make? END_OF_DOCUMENT_TOKEN_TO_BE_REPLACED

Every now and then the things we believe intuitively are confirmed by new research and things become a little easier to understand and handle.

Take self-control for example: resisting the many food and drink temptations that assail us BigD club members is a day-to-day struggle:

END_OF_DOCUMENT_TOKEN_TO_BE_REPLACED

Not a question I have thought about in-depth. At least not until I tripped on a hole in the pavement and fell like a sack of potatoes. Sadly I have no judo or ninja-style automatics, where I could roll forward without thinking in a single movement and end up back on my feet (which is strange really, I did nothing else as a kid at school). END_OF_DOCUMENT_TOKEN_TO_BE_REPLACED