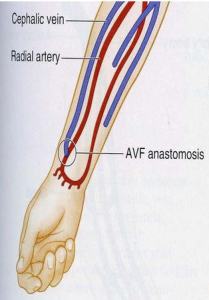 I’ve had my fistula since 1995. It started out as a 5cm (2in) red scar, where the surgeon had opened my right forearm just above my wrist and joined my proximal radial artery (that runs down most of my arm to feed fresh blood to my hand) to my cephalic vein (which runs from my hand up the topside of my arm carrying used blood back to my heart).

At first, there was not that much else to see. The high-pressure blood from the artery made the vein stand out slightly above the flesh of my forearm, but no one would notice it and it was sort of normal.

Except for the thrill, and the bruit: the feel and the sound of the turbulence created as blood from the artery gushes into the vein at the join (the anastomosis). The gush happens each time my heart beats, say, 55 times a minute. The thrill is the heightened tickly pulse I feel when I put my finger onto that join; the bruit is the slow-march drumbeat that pounds relentlessly when I press my fistula to my ear. Both were very primal, raw reminders that my life had changed forever.

Part of me naturally designed for lifting and carrying, cuddling and elbow-bending became the most unnatural of things: a dialysis needle gateway.

And it has served me well so far, enduring the business end of over ten thousand 15 gauge needles, firstly stabbing a new hole each time, and later, using the same (button)holes. Buttonholing has helped reduce the tear and wear, but it has still grown and evolved into the sinewy forearm snake it is today.

And despite the occasional, blatant, What the … is THAT? look I get from strangers, it is my friend. If it had a name, it would probably be Ralph. Ralph was my best mate when we were young. He was a poet: smart, conflicted, loyal, explosive and high maintenance. I think of my fistula as a poem written in blood, with many of the same features. It tells my story – who I am and how I got here. So I cherish it, guard it closely, exercise it and service it regularly with vitamin E and TLC.

But a fistula, no matter how poetic, is not natural and will not be taken for granted.

In the early days, accidental or incompetent needling painted my arm with the Fistula Bruisers team colours – black, blue and yellow. An occasional fall where I thought I’d burst my fistula scared the hell out of me and Julie; but thankfully, a healthy fistula is a robust body part. The odd wandering buttonhole tunnel needed a new entry point; sometimes roadblocks needed various clean-outs and rebores to change the flow path.

And each episode inscribes a new verse on the poem.

In 2010 my right (fistula) hand started to misbehave: it was weak and clumsy, my fingers and thumb were numb, with pins and needles and pain at night. I asked around and the universal answer was carpal tunnel syndrome. The carpal tunnel is an actual small tunnel, at the base of my wrist, that carries the nerve that gives sensation to my thumb and most fingers, and tendons from my forearm. Any swelling around the tunnel puts pressure on this nerve and stops it working. Carpal tunnel syndrome is very common in people with long-term fistulas, where the fistula grows bigger and generally causes swelling and compression on the nerve.

The solution is to cut into the tendons that form the tunnel and release the pressure. I had it done that year, and it worked a treat: I was once again able to do up my left cuff button in a flash. And I had a new 2cm scar at the base of my hand, mini-matching the fistula scar on my forearm to boot.

That was seven years ago. Just recently, the symptoms have returned. I went back to the carpal tunnel surgeon, who was sceptical. Carpal tunnel syndrome rarely comes back, so he arranged an MRI. Result: a new syndrome. The symptoms were caused by ischemia (not enough blood flow) in the hand; most likely from Dialysis-Associated Steal Syndrome.

Steal syndrome is where the blood normally destined for my hand is ‘stolen’ by my enlarged fistula. This happens in about 1% of fistulas (old and new). It can be fairly mild, like mine, all the way to complete loss of fingertip circulation and gangrene.

There are several treatments available, including reducing the flow by wrapping a band around the fistula vein, removing a portion of the vein, or moving the join between the artery and the vein further up the arm. All involve fairly complex vascular surgery.

That’s the state of play today. My 22-year old fistula is strong, healthy and just a bit of a drama queen.

I’m not sure how things will work out. I’ll start with visits to my nephrologist and the vascular surgeon who did the last service. Then decision time: perhaps once more around the surgery dance floor, perhaps I’ll just live with a clumsy hand.

Either way, I expect some new lines in my poem anytime soon.

6 thoughts on “My Fistula, My Friend”