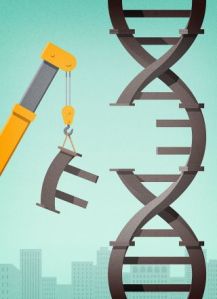 BIG things are happening in genetics, for BigD-ers and for the rest of the world. Scientists have discovered a naturally-occurring, highly accurate gene editor, that can be used to cut and paste or delete genes or parts of genes in DNA. They can use the editor to remove a disease-causing mutation, replace faulty or undesirable parts of a gene or to turn a gene off completely.

What could this mean? Say you’ve inherited a genetic mutation that guarantees you’ll get polycystic kidney disease by the time you reach adulthood. And that it is most likely you will spend the rest of your life on dialysis.

What if the mutant genes that cause polycystic disease, passed down from generation to generation, can be clipped out of your genome entirely and you never pass it on to any of your offspring?

That’s the promise of this new gene editor, called CRISPR, which is basically a genetic-level immunity mechanism that evolved in bacteria to fight off disease.  It was discovered about 30 years ago, but scientist have only now, over the last couple of years, discovered its full potential and are beginning to learn how to use it.

For my part, I’d be happy to line up for a couple of new kidneys, maybe improved eyesight (perhaps from some eagle genes), revitalised muscles and bones, and a couple of other refurbs not really worth mentioning. Not too much to ask.

As you can imagine, many people are beginning to see CRISPR as the most world changing (and challenging) discovery since antibiotics or atomic energy.  It has the potential to enable us to radically change humanity’s genetic code, healthcare, food systems, agriculture and manufacturing – even biological life on Earth itself.

CRISPR stands for Clustered Regularly Interspaced Short Palindromic Repeats, which is just about as lame and forgettable as “BackRub,” a search engine named for its analysis of the web’s “back links”, subsequently renamed Google. I prefer something memorable. New Scientist suggested DNA Legokit or Gene Photoshop, but I prefer something snappy and big picture, like Life 2.0.

Whatever, a CRISPR by any other name will still change the world.

But we are in early days. Currently, most CRISPR work is taking place in labs, cutting and pasting genes in crops (tomatoes, mushrooms, etc), chicken eggs, laboratory mice or organelles (tiny collections of human organ cells, often built using stem cells), to test the outcome of the gene changes.

(One of the most important current organelles to BigD members are those described as mini kidneys, that have hundreds of filtering units and blood vessels and appear to be developing just as kidneys would in an embryo. ” We can look at a little organ from the patient and a little organ from the patient that is only different because we’ve gene-edited to correct a mutation. That’s the best way we can model a disease” said lead Molecular Biologist Professor Melissa Little, of the Murdoch Children’s Research Institute. See the whole story in A kidney in a Dish.)

It will be a few years before CRISPR products move out of the lab and start to deliver on Life 2.0 in the real world.

Which is a good thing, because as a species, we need the time, not just to work out what we can do with it, but to decide what we should do with it.  Changes made to DNA are permanent for every subsequent generation (though there is the option to go back and undo the changes…). None of us is perfect; we all make mistakes.  Are we prepared to risk the consequences, intended and unintended?  Should we? Who decides? Even if every scientist using CRISPR is superbly skilled and motivated only to do good, would that make the technology safe for mankind?

Alas, the world is not run by scientists, but by politicians. aND Every generation has its small percentage of geniuses and psychopaths. Hopefully, the geniuses will move us forward. But what if a new Hitler sets up a lab that moved CRISPR to the dark side? What’s to stop him making and even releasing a pathogen against which ‘inferior races’ or their food crops have no defence?

I am not alone in fearing the dark side.  Jennifer Doudna, Professor of Chemistry and Molecular Biology at Berkeley is working at the forefront of CRISPR development. In a recent edition of the New Yorker, the reporter …asked if she had ever wondered whether the powerful new tool might do more harm than good she looked uncomfortable. “I lie in bed almost every night and ask myself that question,” she said. “When I’m ninety, will I look back and be glad about what we have accomplished with this technology? Or will I wish I’d never discovered how it works?”

Her eyes narrowed, and she lowered her voice almost to a whisper. “I have never said this in public, but it will show you where my psyche is,” she said. “I had a dream recently, and in my dream”—she mentioned the name of a leading scientific researcher—“had come to see me and said, ‘I have somebody very powerful with me who I want you to meet, and I want you to explain to him how this technology functions.’ So I said, Sure, who is it? It was Adolf Hitler. I was really horrified, but I went into a room and there was Hitler. He had a pig face and I could only see him from behind and he was taking notes and he said, ‘I want to understand the uses and implications of this amazing technology.’ I woke up in a cold sweat. And that dream has haunted me from that day. Because suppose somebody like Hitler had access to this—we can only imagine the kind of horrible uses he could put it to.”

The nearest equivalent to this problem that exists now is atomic energy and nuclear weapons. First used in August 1945, it took just under 12 years (July 1953) to establish the International Atomic Energy Agency (IAEA) to promote the peaceful use of nuclear energy, and to inhibit its use for any military purpose. With the odd miss (Fukushima), near misses, and wild cards like North Korea, India, Pakistan, and Iran, it has been successful (so far) in achieving its aims.

Perhaps, with all its shortcomings, we need the same kind of organisation for CRISPR – an International Genetic Manipulation Agency (the IGMA)?  At a minimum, we need to establish and administer safeguards against using CRISPR for the dark side. Perhaps by maintaining a central registry of CRISPR companies, labs and peer-approved projects and a repository of the tools and techniques used to manipulate Earth’s gene pool. Perhaps much more.

And we should start soon before some labs jump the gun: Chinese scientists CRISPR a human for the first time.

Easy to say, harder to do.  But for our future’s sake, I’m happy to wait to live the Life 2.0 dream, rather than rush into the Life 2.0 nightmare.

Safeguard procedures and processes are starting to appear: the US Pentagon’s Defense Advanced Research Projects Agency (DARPA) plans to establish a new genetic safeguard initiative called Safe Genes, to cultivate, among other things, a kind of clean-up crew for engineered genes deemed harmful to or undesirable in an ecosystem.  DARPA researchers are developing responses for accidental or malicious “genetic spills”