Before I begin, welcome to the holiday season! I wish you all a Merry, Happy or otherwise Delightful CABAH (Celebration-Accompanied-By-A-Holiday), and a restful break.

Like many BigD-ers, I love reading.  I love being taken away to exotic worlds with almost real technology, or interesting times in history, or tricky or stirring adventures or Very Big Picture books (the ones with almost no pictures) that help me understand how the world or civilisation or the universe works).  And when I have just had enough of the real world, or I’m tired and I want to slow down my brain, I’ll stroll through a TinTin or an old Donald Duck or Mickey Mouse adventure from the 60’s and laugh myself to sleep.

When I just want to be amused, with not too much thinking, I like nothing better that an exciting SF or fantasy movie, or, the equivalent of comfort food, a who-dunnit that solves itself in front of me.

On BigD the one big drawback of exciting books and movies is the rise in my BP that accompanies the thrilling and absorbing bits (who can sit calm through a Game of Thrones highpoint?). If I’m due for a BP check during these periods, I usually ask the nurse to give me a few minutes, and then I take a few deep breaths and say a few OHMs.  It doesn’t help in the slightest, but it’s worth a try and can head off a more detailed Code Blue alert.

So, what am I to do with the newest form of entertainment on the horizon, which is perfect for BigD?

A little background.  I am a regular listener to Download This Show, a weekly podcast of the latest in technology and internet culture from ABC Radio National.  They recently covered a new Virtual Reality (VR) system from a US company called Oculus, which will most definitely change the way we BigD-ers (and the rest of the planet) will spend a meaty chunk of our time.

With VR it will be possible for us to connect up to our machine, and then depart the material world, to explore the oceans, fly over Shanghai or to the moon, visit unknown worlds, explore our bodies from the inside, act in our favourite movie or play, visit people from across the world, and much more.  Three hours will hardly be enough time to scratch the surface.

Virtual Reality is a computer-simulated environment that can reproduce physical presence in real or imagined worlds.  VR systems can recreate sensory experiences, which include:

Imagine combining all these technologies into a single Virtual Reality environment, and you will have a real-world virtual equivalent of the Star Trek Holodeck.  It’s not quite there yet, but it’s close.

Oculus came from nowhere in 2012 with a VR headset called the Oculus Rift.  It caused a sensation.

The Rift creates a stereoscopic 3D view with excellent depth, scale, and movement.  Unlike 3D on a television or in a movie, this is achieved by presenting unique and parallel images for each eye (like the old sepia colored StereoScope picture below), in the same way our eyes perceive images in the real world, creating a much more natural and comfortable 3D world experience. 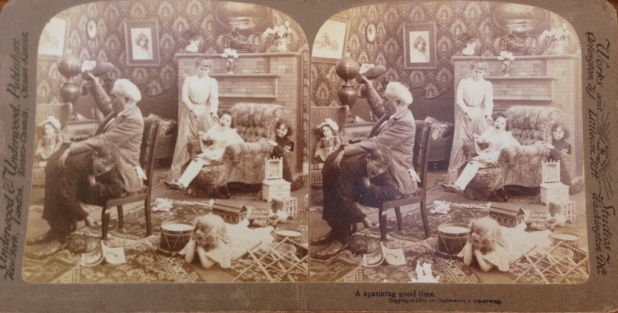 The Rift’s release created a hugely popular developer community where smart software programmers created new virtual worlds, or updated existing games, all for use with the headset.

What does the Oculus VR world look like?  Hard to be exact without donning your own headset, but probably the best example of its impact on the first time user is the 2013 home video titled “My 90-year-old grandmother tries the Oculus Rift”, which went viral, with over 2 million views.

The concept and the potential for Oculus to change the way people interact with the world was so obvious that the company was purchased by Facebook in July this year for a lazy $2billion.

Before you rush out to buy one ($200 – $250), they have not yet released the Rift to us consumers.  They are continuing to build their development community until they have an Oculus Store full of VR Apps to sell for use with it.

However it is close.  Oculus has released a new developer version of the Rift, and jointly with Samsung, a mobile consumer version: the Gear VR headset (currently for developers, but available for adventurers (like me?   maybe!) at the Samsung website.  This is a clever unit that uses the readily available Galaxy Note 4 phone/tablet as the VR engine.  Unlike the Rift which is tethered to a computer, it is completely mobile.  Sounds perfect; though reviewers do note that it is not quite as realistic as the Rift.  At least not yet…

So how does the latest version feel?  Pretty terrific if this is any indication (I like demos # 5, being Superman and #10, the Rift roller coaster).

Of course, once the novelty wears off, continued use will rely on being able to DO things.  Hence the release hold-up until there are enough Apps/games to get people engaged long term.  But us non-gamers will need things as well, like learning new stuff (diving into Apps about history, science, fantasy, SF, travel – even about our bodies or dialysis from the inside, learning new skills, etc)  Or perhaps Apps that help us see complex things in new ways, like 3D interactive graphics of big data about health, finance, government-collected metadata or any other that helps us understand how our world works.

When these things arrive, without doubt, the Oculus Rift or one of the inevitable spinoffs will be part of my dialysis scene in the near future.  And once that happens how long it will take for this functionality to be built-in to the dialysis machine?  Perhaps a little longer (Gambro, Fresenius, et al please note!).

The only problem I foresee is my excitability and its effect on my BP.

But I think I have the answer:  Serenity Now!: a VR meditation App that takes me to a serene green forest or beside a calm sea where not much is happening.  Or if I can bear to take off the headset, maybe I will try some real meditation?