Firstly, my heart goes out to all the people affected by the March 11 earthquake and tsunami in Japan.  While the earthquake injuries were much less that from the 1995 Kobe earthquake (due to more quake-resistant buildings), the death toll from the tsunami has been huge.  To date, more than 7,300 people are confirmed dead and 10,947 are missing.  The tsunami has also damaged power plants in Fukushima north of Tokyo: the Daiichi and Daini plants, with six and four reactors respectively.  In addition to the serious radiation threat, there are also major power outages, which could last until the end of April.

While this has caused the lights to dim in Tokyo’s Ginza, further north, 800 dialysis patients in Iwaki city in Fukushima prefecture had to be transported to Tokyo by bus to find treatment.  Imagine that.  800 BigD patients descending on a city already operating at full dialysis capacity.

It was the same on a smaller scale in New Zealand: on 22 February the Christchurch earthquake just about levelled the city.  Within 30 hours, all 42 local BigD patients, a nurse, family members and carers boarded a Royal New Zealand Air Force 757 bound for Auckland on NZ’s north island.  Within a day, they were set up for regular dialysis in Whangarei, Auckland, Hamilton and New Plymouth.  Two others were dialysed in Dunedin (south of Christchurch).

A few weeks before that the floods in Queensland had a similar effect: the flood water cut not only roads but electricity and water supplies.  BigD patients had to travel large distances to unfamiliar dialysis centres and hospitals.

What would you do if something happened that stopped you getting to your usual centre? What would you take with you?  How much do you know about your dialysis treatment?  Sure, you know how long each run is, but do you use a low-flux or a high-flux membrane?  What size dialyser? What dialysate, which anticoagulant?

If you dialyse at home, you will probably be able to answer all these questions and more.  However, if you dialyse at a centre or a hospital, maybe you haven’t taken much notice?  I know I didn’t until I decided to travel.

Now, I have a small list of things I need when I go to a new unit.  I know that my unit usually liaises with each unit I visit and most of the time it works seamlessly.  But now and then something comes up that is not written down.  When do I stop my heparin?  What pump speed? 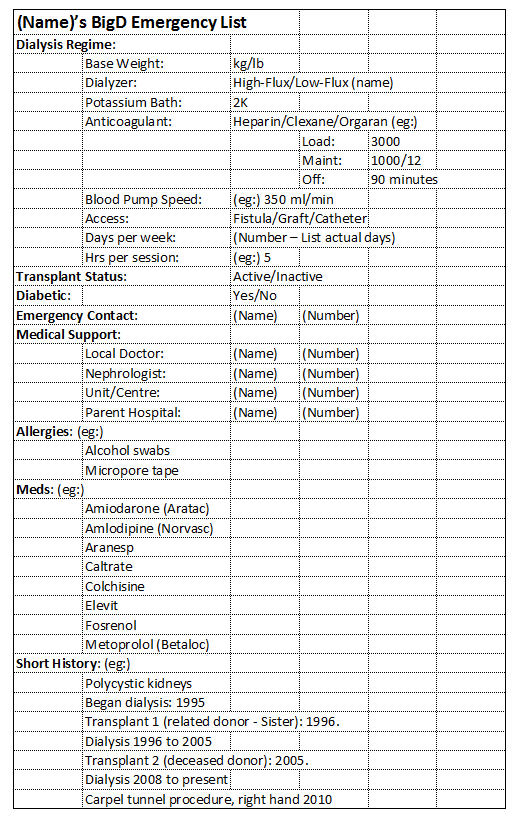 In addition, I keep a copy of my most recent (monthly) lab results.

As I said, I began keeping this info with me when I started travelling.  However, after the disasters that have happened over the last few months, I think it would be a good idea for all us BigD members to keep this kind of list.

And with the advent of excellent online storage tools like Dropbox, anyone can now store this info on a spreadsheet online.  Mine is available to me from any internet-connected PC and on my phone, so I don’t need to actually carry a hard copy with me if I know I have internet access (however, if I am going overseas, I take a hard copy with me).

You never know when you’ll need it.