At various times, I wish we were a little more advanced with the BigD. I wish for access without needles, wearable artificial kidneys and stem cell therapy to regrow a healthy kidney. I am sure they will arrive, eventually.

But once I get over my impatience, reality sets in and I realise how lucky I am to be alive right now, when dialysis has not only been invented but is the streamlined, readily reproducible treatment I take for granted. And to some extent, the same goes for transplants. Today, no-one expects to die from kidney failure, they just (just?) go on dialysis and line up for a transplant.

But if we lived in the late 40’s early 50’s, renal failure was a death sentence. No options or maybes.

Then in 1945 in Holland, one man’s tinkering changed all that: 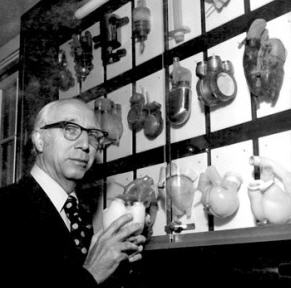 Dr Willem Kolff – His groundbreaking work on the artificial kidney in the 1940s made him a household name and a hero to millions of people around the world who benefited from his ‘tinkering’.

Dr. Willem Kolff, a Dutch physician and tinkerer who built the first successful kidney dialysis machine from cellophane, Ford auto parts and other scraps and in the process saved the lives of millions.

Kolff was a young physician in Groningen in the Netherlands before World War II when he saw a 22-year-old man die of kidney failure. “I felt that if I could remove every day 20 grams of urea from this man, then he could live,” he later recalled.

Physicians had encountered two primary problems in trying to achieve this: filtering urea and other toxins from the blood and keeping the blood from clotting while it was outside the body.

During World War I, a German physician, Dr. Georg Haas, had some success with a newly developed anticoagulant called heparin, but he could not filter the blood fast enough and the supply of heparin was limited. Strangely, he left his work half-completed, and the medical community largely forgot about it.

Kolff began experimenting with sausage casings made of cellophane, a form of plastic made from wood or cotton. The material is porous, and Kolff suspected that it might suit his purposes.

He found that when the casings were filled with blood and agitated in a solution of salt water, the urea and excess water diffused out while essential blood components were trapped inside the tube. Heparin, moreover, had become commercially available.

Kolff wrapped the tubing around a drum and, using parts from a water pump that he obtained from a Ford dealer and some empty orange juice cans, built a mechanism to turn the drum.

The first 16 patients he treated died. Then, shortly after the end of World War II, he was asked to treat the comatose Maria Schafstadt, a 67-year-old widow imprisoned for collaborating with the Nazis. Although he felt that many of his countrymen “would have liked to wring her neck,” he agreed.

After a week, Schafstadt came out of the coma. As she slowly opened her eyes, her first words were, “I am going to divorce my husband,” who was opposed to the Nazis. She lived seven more years before dying of problems unrelated to her kidneys.

Today, millions of people around the world undergo regular dialysis each year to keep themselves alive, often as a temporary measure while they await a kidney transplant.

Kolff later developed a portable version of the dialysis machine that could be used to perform at-home dialysis.

After he immigrated to the United States, Kolff spent 17 years at the Cleveland Clinic Foundation before moving on to Utah in 1967. He finished his career there, formally retiring in 1986. He continued working in his laboratory until bad health overtook him in 1997.

Kolff was divorced by his wife of 63 years, Janke, in 2000, reportedly because she could no longer stand his constant tinkering.

Just this year,  on Wednesday 11 February 2009, Dr Kolff died from natural causes at a Philadelphia care center, aged 97.  (For more about Dr Kolff’s life, his exploits in WWII and his role in developing other artificial organs – including the first artificial heart – go to his obituary: LA Times, Feb 14 2009).

In just 64 years, less than a lifetime, the dialysis machine has gone from a collection of sausage casings, a car pump and bits and pieces, to the flash electronially-controlled, pure-water-fed units of today.  But one thing remains, sitting bright inside every unit: Dr Kolff the tinkerer’s design.

So next time you’re on the machine, spare a thought for Dr Kolff, and all those other tinkerers out there.  It’s through them that our wish list will come true.

One thought on ““Tinkerer” builds his own Dialysis Machine”